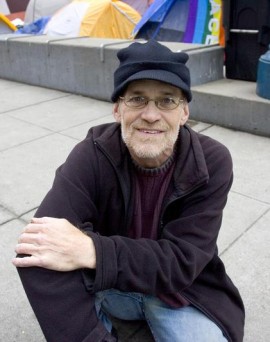 Hello, my name is Chance Martin, and I was raped in a county jail in 1973 in Indiana when I was still a high school student.

I was 18 and I was attending a party at a Holiday Inn with my girlfriend when I was taken to jail. I didn’t even know why we were arrested until later. I found out later that a guy at the party had dropped a chunk of hash in the lobby in front of a hotel detective, and the police came and took everyone at the party away.

It was very late when I was taken to jail. They put me in a cell, a big cage really, with about 40 guys stacked in bunk beds. I was scared out of my mind. I was a little guy back then, and I had long hair, I was kind of pretty. I kept thinking that I would get to make a phone call and all of this would be over, but that didn’t happen.

I was assaulted within 24 hours. I must have looked as scared and dejected as I felt, because this guy came up and sat on the bunk next to me and said, ‘Let’s cheer you up and play some cards.’

I couldn’t even figure out what they were playing. I thought we were playing poker, but then they said, ‘Okay, you lost, pay up.’ And that’s when these guys told me that they were going to fuck me. I said, ‘Oh, no you are not,’ and they said ‘You see that other guy over there?’ And this guy’s face – I swear to God, I had never seen anybody’s face that had been beaten that badly. He looked like he had gone through the windshield of a car. They said, ‘Do you want that to happen to you?’ And these guys were the trustees.

They started jamming me with a broom stick, and they just kept on beating me. They knocked the wind out of me and I curled up in a ball. They dragged me to a bunk and this guy said ‘Now you have to give me head.’ I didn’t even know what he meant. I had never heard the term head before.

For the rest of the time I was in that cell, the guy with the beat up face became my role model. I stayed the hell away from everyone. I was so mad at myself because I feel like I didn’t put up a good fight. I really wish that they would have beaten me as bad as that other guy. But the guy I was pissed off at the most was the guy who dropped the hash in the lobby. He was there in the cell with me, and he never tried to help me.

It was so humiliating. I knew a lot about embarrassment but this was the first time that I was humiliated.

After I was released from jail, I got kicked out of high school because of the arrest. I went to court on the charges, and the judge gave me the choice of going into the armed forces or going to prison. I chose the Air Force, even though this was in the middle of the Vietnam War, because I was so afraid of what might happen to me in prison.

It would have been so easy to protect vulnerable people in that jail, but they didn’t even try. They had guys who were charged with attempted murder and assault with a deadly weapon thrown in with drunk drivers. There was no supervision in that jail. There was no guard who had a line of sight into that cell. The guards’ office was pretty far away, and the TV was on all the time. There was zero supervision. The only time I saw a guard the whole time was when they were bringing a prisoner in or taking a prisoner out, or when they inspected the cell in the morning to see if the trustees had swept and mopped.

What happened to me in that cell has affected my life in so many ways. I think it permanently damaged my self-confidence. I had a girlfriend when I was arrested, but I’ve never really been able to have a functional relationship since then. Because of what happened to me in that cell, I’ve questioned my sexuality so much – there was a time between my second and third marriage when I really wanted to be gay, because it would have resolved so much conflict. I never questioned my sexuality before I went to jail.

I’ve been diagnosed with mental illness and have been hospitalized more times than I can count. I abused drugs and alcohol to try to kill myself on the installment plan. I couldn’t successfully commit suicide, although I wanted to worse than anything in the world. I was homeless off and on for about six years.

Being raped in that cell and being diagnosed with mental illness were the two pivotal events of my life. I’m overcoming it now, but the rape took 20 years away from my life. What happened to me was barbaric. Please work to put safeguards in place so that no one else has to go through what I went through. Thank you.