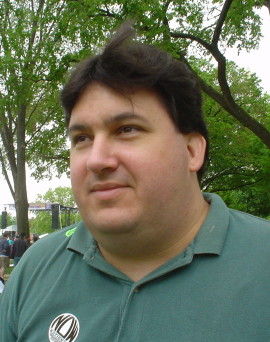 My name is Keith DeBlasio, and I’m here today to tell you about what happened to me while I was incarcerated in the Federal Bureau of Prisons.

After being convicted of a nonviolent securities offense, I was sent to FCI-Morgantown. Set at a former youth facility, Morgantown is a minimum security facility with no fence. Places like Morgantown are used for individuals with relatively no risk of violence, escape, or predatory behavior.

As an inmate at Morgantown, I witnessed corrections officials breaking the rules of the institution, and I reported them. Because of my reports, the prison officials retaliated against me by holding me in solitary segregation, by falsely accusing me of misconduct on charges that were later proven to be false, and finally, I suppose as a last resort, by transferring me to a higher-security facility in Milan, Michigan.

At the time, FCI-Milan was a facility often used for more unmanageable inmates in the mid-Atlantic region. It had a history of gang activity, large scale riots, violence, and predatory assaults.

I was being sent to a place known to be dangerous simply for speaking up. I was worried about what might happen to me there, but I honestly had no idea how bad it would turn out to be. I tried to protest the decision to transfer me, and I asked not to be housed in the dangerous dormitory-style housing at Milan. But I was placed in a double dormitory with about 150 inmates, dozens of blind spots, and only one officer on duty at any given time. It was here that my nightmare began. It was here that I was sexually assaulted by the same assailant, more times than I can even count.

After serving three days in segregation for brutally assaulting another inmate in a stairwell, he was released and assigned to my dormitory. That was when the repeated assaults began. He threatened to stab me, and he raped me. There were numerous assaults in a long period of ongoing abuse, especially after prison officials moved my assailant into the same cubicle with me as my bunkmate. I couldn’t defend myself, because he had his fellow gang members standing watch. I knew that if I reported him, I would face repercussions from the other gang members and no action was being taken by officials.

I felt there was no escape. Another man had reported abuse before me and, instead of finding safety, he was put in a recreation cage alone with his rapist, all while under protective custody. So I had just cause for staying silent.

Unfortunately, my story does not end there. Eventually, I became very ill. My illness was mysterious – swollen lymph nodes, vomiting, diarrhea, weakness, dizziness, and scabs on my scalp. Medical staff could not identify the illness, and so I spoke with my personal physician and friend at home. She prompted me to ask for an HIV screening.

Permission to take the HIV test took quite some time. It was only after a lengthy grievance process and calls from the outside physician and family members that an HIV test was performed. Sure enough, I was determined to be HIV positive, and extensive triple therapy was begun which would be a lifelong ordeal.

Later I found out that prison officials knew the assailant was emotionally disturbed, a repeat predator, and on psychotropic drugs for his mental problems, and yet they did nothing to protect me. I was a nonviolent offender, but I was given a life sentence. I was repeatedly denied protection from a known predator with HIV.

I’ve gone through a lot of different stages, emotionally and physically, when it comes to dealing with the HIV that I contracted while behind bars. One of the challenges that I still deal with is the neuropathy that comes along with the HIV and some of the medication that I take. I have lots of problems with my medication. Many mornings, I wake up nauseated and spend hours with vomiting and dry heaves. Yet, even though the medication makes me sick, it’s what keeps me from developing full-blown AIDS and passing away.

I’m now on disability. Between medications and other HIV-related complications, I’ve had a very hard time working. In order to stay healthy, I need to be able to work on my own schedule and partially out of my home. Because of these restrictions caused by my HIV-positive status and the need for constant medical treatment, it’s has been all but impossible for me to even work a partial work week. It has pretty much done me in financially. My medication alone costs $1,800 per month, which does not include doctor or hospital visits. Medical insurance is of no assistance since I won’t be covered by an insurance company for pre-existing conditions. I have received some help from my family and, now that I am on disability, I have some funds to pay for what I need. Yet, disability didn’t kick in until July 2004 and, in the meantime, I went into debt to get the medication and treatment that I need, in addition to simple living expenses.

Sexual abuse behind bars has scarred me mentally and emotionally. Years of therapy, both behind bars and in the outside community, have helped me a great deal with coping, but what happened to me is something that affects me to this day. I suffer from anxiety associated with post-traumatic stress disorder. Large crowds have become a source of anxiety for me. Even being buried in the sand at the beach, something that I used to look upon fondly and associate with my childhood memories, triggers anxious fears of confinement.

When I think about it, it is this disease that I’m left with that makes me feel the most violated. Even though I am free, and far from the abuser and the institution, the nightmare is not over. Every day I wake up to the reality of my illness – the constant side effects of medications, the progressing neuropathy, and the uncertainty of knowing my viral load may climb and my immune system may fail. The pain, fear, and yes, the anger, will be with me always.

Why did I receive this life sentence? And why doesn’t anyone have to answer for their actions? At this point, I can only ask why.