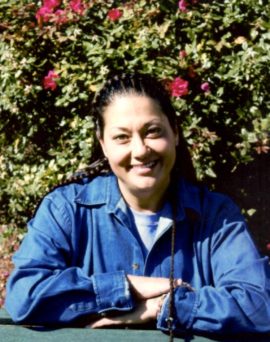 Your donation will help people like Alairis to heal — and prevent others from being abused.

My name is Alairis and I have been incarcerated for almost 20 years. I am a survivor of sexual assault and harassment. It started when a male work supervisor commented on my hair and makeup. I dismissed it, figuring I was out of practice in dealing with men. Even though he made me uncomfortable, I ignored the warning signs.

As time passed, this male supervisor would touch my hair, make comments about my appearance, and find time to be alone with me. The supervisor began to hug me, touch my breasts, and rub himself on me. When I protested, he would laugh. He began to proposition me for sex and would make vulgar comments. Once, he even offered money in order to watch me and another inmate have sex. I would refuse and change the topic.

The environment at work became tense and nearly intolerable. I was anxious and stayed on high alert. I began to avoid my supervisor and tried to never be alone with him. It worked most of the time, but not always. He’d get angry and physical, pushing or punching me on the arm or back. I confided in my two best friends about this treatment.

One of my friends, who lives on the outside, reported the assault to the Department of Corrections (DOC). I also filed an emergency grievance, which was never answered. The PREA investigator claimed to have never received it. My friend followed up at the DOC. They sent an independent investigator to talk to me and others who reported sexual abuse by the same supervisor.

Weeks passed and there was no action on the part of the prison. It took nearly three weeks of daily phone messages in order to get the warden to respond. I was brought into the warden’s office and was verbally berated, abused, and insulted. He claimed ignorance of my grievance and the DOC investigation.

The PREA investigator finally spoke to me and, twelve hours later, my claim was found to be “unsubstantiated.” This happened even though three separate complaints had been lodged against the supervisor over the same time period as my assaults.

The next day, I was transferred to a parish facility. This caused me to be removed from two educational programs, including a bachelor’s degree program I was enrolled in. It was a clear case of retaliation for speaking out.

A friend gave me the address for JDI and I wrote for the information packet. I decided not to be silenced. Just because I’m serving a sentence for a crime does not mean I deserve to be abused. I want to be a voice for others who have been sexually assaulted behind bars.

There are consequences for speaking out, and retaliation is very real. When you turn for help, and those who are placed in positions to help you fail to do so, it adds to your trauma. However, you are not alone. There are other voices crying out the truth. I’m not sorry for ending the silence. I will continue to speak up until the abuse stops and everybody in detention is safe.