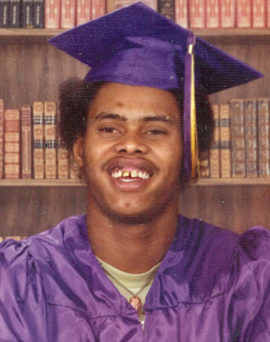 Your donation will help people like Ivory to heal — and prevent others from being abused.

My story begins when I was transferred to a new unit. I was assigned to work as an administrative porter for the major and captain, which included taking care of the incoming officers. I prepared their lunches and drinks, and did whatever I was told by these officers. One particular officer began to show interest in me, acting as though she really appreciated the work I did for them. She would sometimes sit and talk to me about family things, such as her children and husband.

Then she began to talk about her childhood. She would tell me things that were so sad, things like how people would take advantage of her. Knowing all this, I felt a sense of pity for her.

I would do little things for her, like have the coffee, food, and drinks ready for her as soon as she went on breaks. One day, in the captain’s lobby, I was washing some cups and she was standing there talking to me, as usual. And then all of a sudden, she asked, “How long have you been locked up?” Before I could answer, she closed the door and began holding me and kissing me. I pleaded with her, telling her that I couldn’t do this, but she got angry and kept telling me to be quiet.

When she stopped, she became somewhat apologetic. I became real nervous and scared. After she left, I worried about what just happened. When I got my nerves together, I went to talk to my boss. I told her what had happened. My boss said to me, “You know she’s crazy. She’s been here ten years and has been doing things like that. Just stay away from her, because she has children and I’d hate to see her get fired.”

So I tried that — and it didn’t work. The next time I saw her was a nightmare. She said, “You trying to get me fired?”  My boss must have told her what I said. Then she told me to get down on my knees. If I didn’t, she would tell people that I touched her in an inappropriate way. And that would mean that I would definitely be given a new charge.

So I got on my knees, she pulled down her pants and pulled her panties over and said, “Come on, you know how to do this,” acting real angry. I was scared as hell, because if I’d gotten caught I know she’d say I was assaulting her. When she left, I quickly told a sergeant. The sergeant said there was nothing we could do about it, because I was an inmate and she was an officer. I couldn’t win that fight. The sergeant said she’d watch her — but this sergeant didn’t do anything to stop her from assaulting me.

I tried to turn in the officer who abused me, but the administration claimed that I was having a consensual sexual relationship with her. As far as I know, she wound up being charged with having improper sexual activity with a person in custody. But it wasn’t a consensual relationship.

Even though I told the officer to stop sexually abusing me or I would file a formal complaint, I feared that something like this would happen. Because I worked around in the administration, I saw them turn things around on inmates all the time.

On this little unit I was on, there were several women officers who were taking advantage of inmates. The officer who abused me confessed to the sexual acts. But the agency allowed her to cop to improper sexual activity with a person in custody — a lesser charge than the actual crime she committed, which was sexual assault on a person in custody.

They won’t tell me the outcome of the case. I request information and I receive no answer. They tell me to write to the Office of Inspector General for the outcome. They say that because I’m male, it’s impossible for this to happen. And that’s not true. I know that for a fact. In Texas prisons an officer can get you killed.