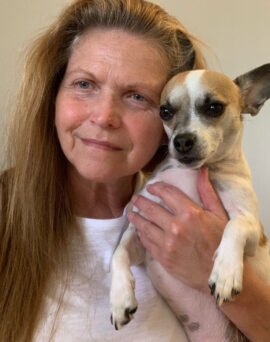 I am one woman among thousands of incarcerated men, women, and unfortunately, children who have suffered or are still suffering abuse at the hands of corrections staff who are entrusted to care for us. We also suffer at the hands of fellow inmates and free staff such as electricians, cooks, and other contractors. We have the right to be safe. It is not a privilege.

My life was already in turmoil before I was abused, being a run-away at 15 years old. I fell in with the wrong group of people and became addicted to drugs, ultimately landing me in prison as an adult. I was the perfect target, because I was alone in prison. I had brothers and sisters, but I was too embarrassed to contact them. I refused to put any of their information into my central file other than their names. My perpetrator knew from my file that I’d never had a visit — that I was isolated.

The man who raped me was my boss. The prison had five electricians, and each one was assigned an inmate to assist them. When one of the assistants was paroled, I was assigned to replace her.

After I reported what happened to me, I was deemed a threat to the safety and security of the institution and placed in administrative segregation. I was there for months on end, fighting with the prison administration and all of the red tape that comes with trying to get to safety.

I would not do what they wanted me to do, which was falsely accuse an inmate of my rape. I stood my ground, and it made my life very hard. I was threatened, starved, punished, and never taken outside to the recreation yard. The man who raped me continued to work at the prison for several more weeks and spent most of those days making my life a living hell. He came into the segregation unit where I was being held and threatened to cut my throat and kill my family if I told on him. He went door to door in segregation, telling the inmates who were violent and serving life sentences that I was telling on him for bringing in drugs to them, further putting my life in danger. I received over 50 death threats.

I could not have a roommate, nor could I go outside with anyone. I lived alone and spent all my time alone.

I lived in fear, isolation, and depression. I just wanted to die. Eventually, my allegation was investigated and I was able to pass a polygraph test. The man who raped me told them he had “consensual” sex with someone, but that he could not remember the person’s name. The Sheriff’s Department was contacted and their report stated that evidence was found, but because it had been months since the assault everything was covered in dust and much of it couldn’t be tested. During the investigation, it was found that his previous assistant had also been raped. I hadn’t been his only victim, but I was his last in that prison.

Because the California Department of Corrections and Rehabilitation could only keep me safe in segregation, they eventually had to send me out of state for my protection. My health was also in bad shape. The assault had been so brutal that I lost my ability to have children and I contracted Hepatitis C.

My rapist was charged with two counts of rape, but he was able to plead down to sex with an inmate, a lesser charge. He was sentenced to 30 days in the county jail, which he could serve on weekends, and ordered to pay a $100 dollar fine.

I felt lost and devastated for a long time, but once I’d been transferred out of state and felt safe, I started reaching out for help, including to Just Detention International (JDI). I could never have been brave nor stood up for myself and others if I had been alone. But it was four simple words — “you are not alone” — in a letter from JDI that that kept me focused and determined to make my voice heard and to speak for those who were either too fearful, ashamed, or simply could not speak for themselves.