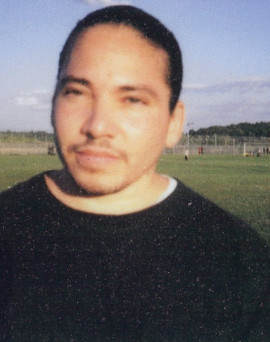 Your donation will help people like Rafael to heal — and prevent others from being abused.

During my incarceration I decided to take advantage of educational programs. First, I enrolled in school in order to obtain my GED. I also obtained my legal research certificate, and became a teacher’s aide, teaching and assisting in classes. So, from 1987 to 2010, I have kept myself busy and did my best considering my circumstances.

I arrived at Coxsackie Correctional Facility in New York, Greene County, on May 3, 2006. I quickly took program as a teacher’s aide, and four months later I changed to the industry garment shop. Everything went fine until March of 2009 when correctional officer KP was transferred to this facility. C.O. KP was one of four or five officers who were assigned to do pat frisks on inmates upon leaving the industry area twice a day.

There are about 100 inmates in the industry and if there are four or five officers during the frisk, then C.O. KP averages about 25 inmates in the morning and another 25 in the afternoon. On March 2009, I fell in line to be pat frisked by KP.

C.O. KP leaned his torso area and compressed his genitals against my buttock and in a sexual manner glided his hands all over my body, rather than a standard “pat”. The frisk was done in a slow, deliberate manner. I thought maybe it was a mistake or that my mind was playing tricks on me. He would also grab the back of my shirt and twist it in an aggressive manner and would tell me to step forward and turn around. These actions sent a clear message: “I am in control.” Note that at the time I was incarcerated for 22 years and never had an officer in a previous facility that I resided in done a pat frisk like this.

I decided to write a complaint and many other inmates also wrote complaints. The Supervising Sergeant and the officer who were present didn’t do anything. Some officers made wise cracks, like, oh he got another one. Numerous inmates were interviewed by high rank officials within days, but not me. I then wrote a letter to my correctional counselor for assistance and he gave my letter to Sgt. G, who then wrote a bogus misbehavior report, totally ignoring the true purpose of the letter.

More than a month after I wrote the complaint, a Lieutenant interviewed me and all he did was make C.O. KP the victim and try to intimidate me. He had a nasty persona. I stood calm because I knew what his motives were.

Soon thereafter, I spoke to an Inspector General from the Commissioner’s Office and he assured me that C.O. KP was going to be retrained. Yes he did stop the compression of his torso, but he was left to frisk and he frisked me many times after and I felt very, very uncomfortable every time he touched me.

About two months passed and I never got a written reference from the Superintendent or Captain concerning the investigation to my complaint. I wrote twice to the supervisor at the complaint office, and he notified me that he’s still waiting for a response. I never got a response to this date.